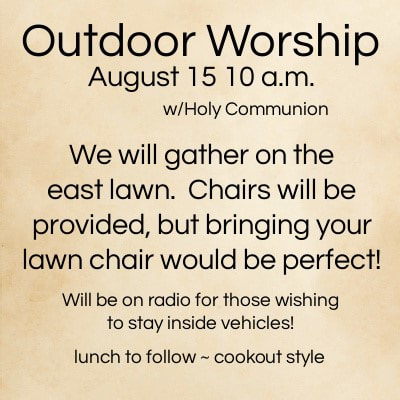 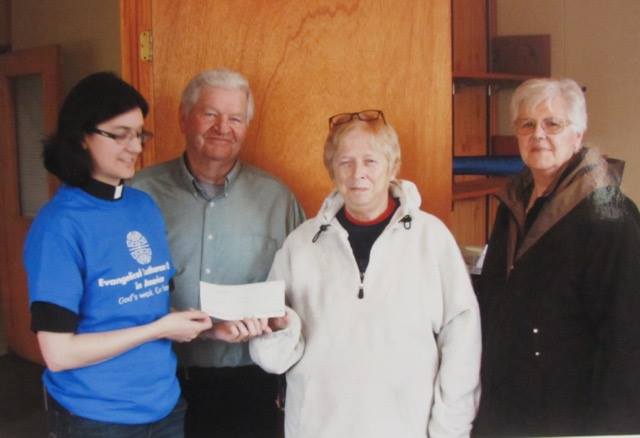 ​
Donation for Flint
Paul and Lynn Burks and Larry and Rita Bennett recently presented the Rev. Monica Villarreal (left), of Salem Lutheran Church in Flint, Michigan, a check for $2,002.77 and 10 cases of bottled water. The children of Upper Sandusky’s First Lutheran Church collected coins during Lent for Salem Lutheran Church, which needs to replace its plumbing infrastructure because of corrosive pipes and lead in the water.
A pair of Upper Sandusky couples recently traveled to Flint, Michigan, to deliver 10 cases of bottled water and more than $2,000 to Salem Lutheran Church.
Paul and Lynn Burks and Larry and Rita Bennett traveled to the Flint, Michigan, church on behalf of the congregation of First Lutheran Church in Upper Sandusky. The youth in the local church congregation raised $2,002.77 by collecting coins during Lent to be donated to Salem Lutheran Church, which needs to replace its plumbing infrastructure because of corrosive pipes and lead in the water.
“Pastor Monica (Villarreal) greeted us with warm hugs and humble thanks for all the support that you have given and the hope which it provides for the neighborhood,” Rita Bennett said in a written statement. “She emphasized that the water crisis is far from over — in fact, she gave us a ‘souvenir’ to bring back.”
That item was a bottle of water drawn from a non-filtered faucet at the church.
“Sediment is quite obvious,” Rita Bennett said.
The couples traveled to Flint on a Thursday, the start of water pick-up days at the church. Rita Bennett said 20 pallets of bottled water are delivered to the church on those days, with free pick-up of unlimited cases from around 9 a.m. to 3 p.m.
“All water is picked up each day,” Rita Bennett said. “Wednesday was also food delivery day from the Food Bank of Eastern Michigan and bags of canned food, fresh potatoes and apples were also available. All this is done with volunteer help — church members, caring friends and even neighbors who come to get water pitch in.”
The Burkses and Bennetts observed corroded galvanized plumbing that had been removed from near the church’s boiler system, and the estimate for replacing the damaged church’s plumbing, sinks, faucets and bathrooms is around $30,000. The church needs an additional $32,000 for asbestos removal prior to replacement of the plumbing, Rita Bennett said.
“The four of us were very humbled by what we saw and heard, but were reassured by Pastor Monica that your gift of money and water are indeed appreciated and provides hope to the members and friends of Salem Lutheran Church,” Rita Bennett said. “Just another example of God’s hands, our hands, providing love and support (and) helping one neighbor help another neighbor.”
Flint, located 70 miles north of Detroit, is a city of 99,002, where 41 percent of residents live below the poverty line and the median household income is $24,979, according to the U.S. Census Bureau.
The city once thrived as the home of the nation’s largest General Motors plant, but its economic decline began during the 1980s when GM downsized its industrial complex.
The city switched water sources in 2014, and while a new pipeline connecting Flint with Lake Huron was under construction, the city turned to the Flint River as a water source during a two-year anticipated construction transition, Rita Bennett explained.
“The Flint River had been the city’s primary water source decades earlier, but Flint switched to Lake Huron in 1967, purchasing its supply through the Detroit Water and Sewerage Department,” she said. “Historically, the water in the Flint River downstream of Flint has been of poor quality, and was severely degraded during the 1970s, due to ‘the presence of fecal coliform bacteria, low dissolved oxygen, plant nutrients, oils, and toxic substances.’
“According to a class-action lawsuit, the state Department of Environmental Quality wasn’t treating the Flint River water with an anti-corrosive agent, in violation of federal law. The river water was found to be 19 times more corrosive than water from Detroit, which was from Lake Huron, according to a study by Virginia Tech. Since the water wasn’t properly treated, lead from aging service lines to homes began leaching into the Flint water supply after the city tapped into the Flint River as its main water source.”
Health effecfts of lead exposure in children include impaired cognition, behavioral disorders, hearing problems and delayed puberty. In pregnant women, lead is associated with reduced fetal growth, and in the entire population, lead consumption can impact a person’s heart, kidneys and nerves.
Although there are medications that may reduce the amount of lead in the blood, treatments for the adverse health effects of lead have yet to be developed.
Salem Lutheran Church is the only Evangelical Lutheran Church of America church in Flint. Villarreal was born and raised in Flint, and is considered a part-time pastor and part-time social worker.
The church has a congregation of about 50 people each Sunday, the Bennetts and Burkses said.
“The sanctuary looks similar to ours (First Lutheran Church in Upper Sandusky), banners were proudly displayed, an Easter cross was adorned with flowers,” Rita Bennett said. “Just like here at First, in earlier years, the sanctuary was filled with worshipers. Despite the smaller number of attendees, the congregation is filled with hope and eager to serve its neighborhood with caring hands in very trying times.”
She noted Flint will deal with its lead crisis long after the media leaves the city.
“The lead will still be in the pipes, and the chemicals and bacteria will still be in the river,” she said. “But people of faith and people of goodwill will still be here, too, to accompany one another and to hold government accountable. And that should give hope in Flint and urgent anxiety in Lansing, where both are needed.”